In collaboration with our colleagues from Warsaw University of Technology, we have started an operation aimed at developing Monte Carlo simulation codes for systems based on 2D materials. These materials, whose prototypical example is graphene, exhibit many extraordinary properties which can find applications in many fields, including electronics and spintronics and the emerging field of ‘valleytronics’.

The first step was to build models of electron transport in 2D materials, in particular graphene and silicene (its silicon counterpart), which are both gapless with linear dispersion near the K points minima. Piecewise analytic approximations of high energy dispersion relation, have been used, in order to make easier future implementation in device simulator. Velocity field characteristics, mobility and diffusion coefficients in the materials have been calculated. Special attention has been paid to the case of high carrier density, often overlooked in the literature, and special techniques have been developed to account for Pauli exclusion and Coulomb scattering.

In view of spintronics applications, a Monte Carlo model has been developed which describes both electron transport and spin dynamics. The originality is that Pauli principle is treated in a special way to account for both random (scattering induced) and coherent spin evolution, enabling to consider high carrier densities. Our results are consistent with experimental findings and support the idea that spin polarization may be conserved for a long time (several ns), in graphene, which is attractive for spintronic applications.

In spintronics, the spin of electrons is used to carry information. In systems such as graphene and ‘graphene-like’ 2D materials, band structure presents two valleys, not equivalent but energetically degenerate, at points K and K’. The valley index bears some similarity with the spin and this additional degree of freedom can also be used to carry information. This is the realm of an emerging discipline called valleytronics. In the next years, we plan to investigate ‘valley properties’ of graphene and other 2D materials. 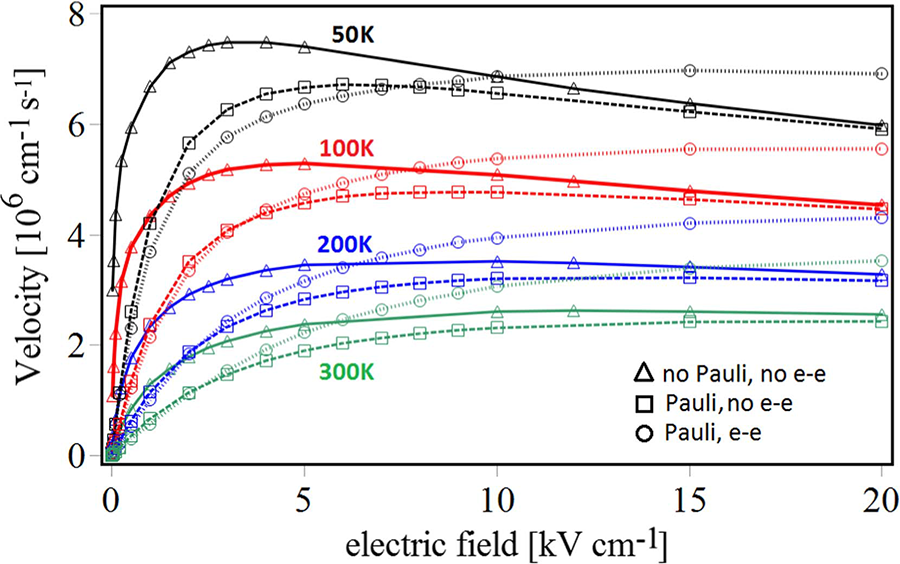 Velocity-field characteristics in silicene, calculated by Monte Carlo simulations for several temperatures. ( Analytical approximations of band structure and scattering rates have been used ). The Electron sheet density is equal to 1×1012 cm-2. The impact of electron density on electron transport is two-fold : (i) Some regions of reciprocal space are significantly populated. Since Pauli exclusion principle forbids double occupation of states, it may strongly affect electron distribution function. (ii) Direct Coulomb scattering between electrons. To illustrate the influence of these phenomena, three cases are compared: (i) neglecting the effect of electron density, i.e. without two body coulomb scattering, without Pauli rejection. (ii) Pauli principle is accounted for but not two body coulomb scattering, (iii) full account of electron population, with Pauli and Coulomb scattering. P. Borowik, J.-L. Thobel, L. Adamowicz, Semicond. Sci. Technol. 31 115004 (2016) doi:10.1088/0268-1242/31/11/115004 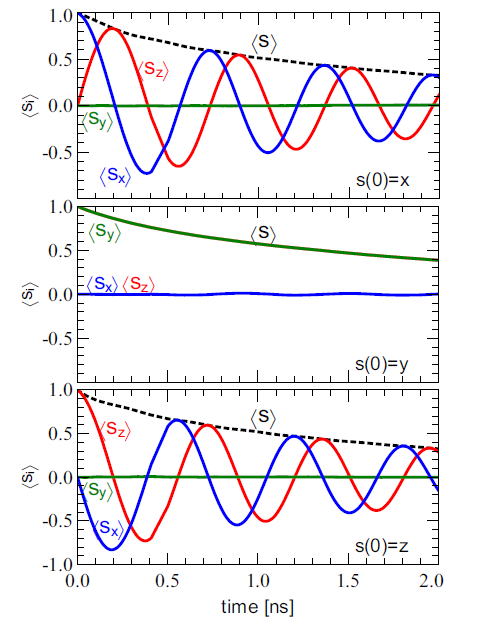 Monte Carlo simulation of spin relaxation in graphene at high carrier density (Ns=1×1012 cm-2). At initial time the population is fully spin polarized: all carriers have their spin aligned in the same direction (x, y, or z direction for top, center, and bottom panel respectively). Then spin evolves under the effect of effective magnetic field (precession motion) and random carrier scattering (Dyakonov-Perel and Elliott-Yafet mechanisms). , , and are the components of spin polarization measured along direction x,y,z. Owing to spin procession motion, and exhibit oscillations, damped by random scattering, while the total polarization exhibit only an exponential decay. The time constant, spin relaxation time, is here of the order of 2 ns. P. Borowik, J.-L. Thobel and L. Adamowicz, Journ. Appl. Phys. 122, 045704 (2017), doi: 10.1063/1.4995821