This work is supported by research actions within the framework of the CPER "CISIT" program, the ITrans labeled projects "CUB4" and "PRIMACARE" supported by the ANR, the INTERREG projects "ModEasy" and "Letsgo" and finally by the IRT RALINIUM. 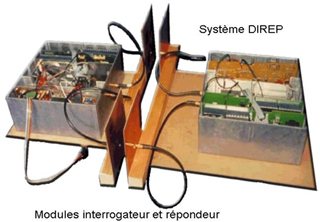 Example of the work done: Implementation of an anti-collision radar for road vehicles that is able to detect the nature of the obstacle (motorcycle, bicycle, pedestrian, freeway edge, etc.) for better accident prevention. Within the framework of the ANR project "PRIMACARE" labeled ITrans, the designed radar system signals to the driver the obstacles perceived on 360°, by means of spatialized alarms (3D sound). The system including the achievements of all the partners of the project (A-Volute, UVHC-LAMIH and LEOST-IFSTTAR) was the subject of a demonstrator in March 2012 showing the performances of this concept. The following figure shows the vehicle that we equipped to test the proposed algorithms. 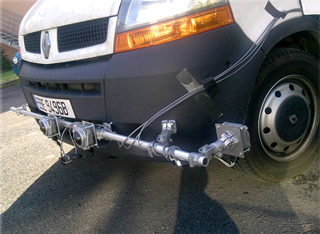 One of the aspects studied within the framework of the PRIMACARE project consists in developing a UWB radar whose main advantages are :

4G wireless communication systems (LTE, IEEE.802.16e and IEEE.802.20) are being developed in the railway world to provide information, maintenance, seat reservation services or Internet access. The consequences of the Doppler effect on the performance of such systems are important. Our work is to propose solutions to minimize these degradations. It focuses on an efficient estimation of a time-varying channel in an OFDM system. In order to estimate the channel, which is essential for data equalization, pilots are inserted in the OFDM symbol. The channel is estimated in the time domain and the time variations of each path of the channel is modeled by a basis function expansion (BEM Basis expansion Modeling), thus, the channel is obtained by the corresponding basis coefficients. A pilot structure is proposed, which consists in varying the pilot positions from one symbol to another. The pilot positions are dynamically allocated during the transmission of OFDM symbols. This is called dynamic pilot allocation (DPA). The time-varying channel estimation is better and therefore the system performance is improved compared to the Doppler effect. In a multi-user OFDM system, we propose to exploit the idea of ADP to create spatial diversity. Each user is designated by a unique driver combination. By using cooperation between different users (spatial diversity), the estimation of the time-varying channel is improved and the consequences of the Doppler effect are reduced.

Recent developments in digital electronics and telecommunications have accelerated the realization of several systems dedicated to transportation, especially for safety and comfort. Hence the need to move from a few Mbits/s link to links that can reach several Gbits/s and thus allow a multitude of future applications. Our technological challenge is to achieve the desired throughput of the order of Gbit/s, using UWB signals. Moreover, the very wide band propagation is considered favorable, because it can minimize the harmful role of fading, it allows to improve the link budget compared to conventional low band modulations. It is indeed in this context that the ULB technology initially used in radars has been considered for very high speed wireless communications over short distances.

In this context, we have proposed a new modulation named M-OAM allowing the increase of the throughput and the improvement of the robustness of an IR-UWB system with good BER performances.

Other work of this group is dedicated to high speed wireless communications. The COMNUM group has taken up the challenge of proposing a communication system ensuring the highest data rates that exist for a wireless link (> 3Gbits/s), connecting for example a camcorder to a TV screen. 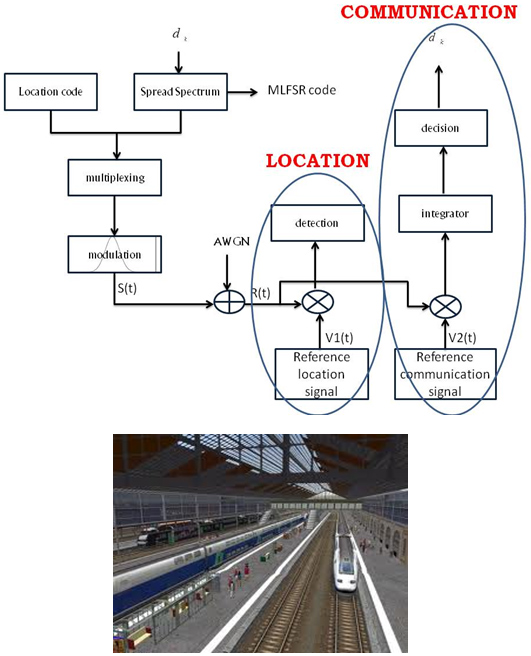 Location and communications for trains

Location and communications for trains:

Intelligent transport systems play an important role in the railway field. The aim of this work is to study and design a cooperative radar system, which allows the detection and identification of obstacles on the tracks, the localization of trains, and the transmission of train-infrastructure data, while relying on ultra wide band technology to ensure a good localization quality and a high transmission rate without interfering with existing systems

In this context, we propose to develop a system of localization and communication between trains based on a secure software platform capable of ensuring the safety and reliability of the system, at unprecedented levels. It is a system capable of offering, within the same module, two functionalities, localization and communication between trains in various environments encountered.
Different multiple access techniques will be developed to ensure train-to-train or train-to-infrastructure localization and communication, with good performance in terms of throughput, range and transmission reliability. We plan to provide a mechanism to define the process chain (transformation, verification, ...) needed to produce low-level models from high-level models. The proposed communication and localization system will be simulated and tested under real operating conditions.
This project can greatly improve transportation safety, and is crucial to maintaining a technological edge in the region.

The applications requiring location systems are numerous (Transport, Tourism, Health, Aeronautics, Factories, Mines, ...). The use of space techniques, such as GPS geo-positioning, for civil applications has been common for several years, but is limited in terms of accuracy in indoor environments. Breaking with the techniques commonly used to minimize the constraints of the propagation environment, the use of Ultra Wide Band (ULB) technology can effectively meet these new needs. The objective of this work is to study, develop and test a localization system based on this technology and in particular the realization of 3D localization techniques.

Schematic diagram of the system 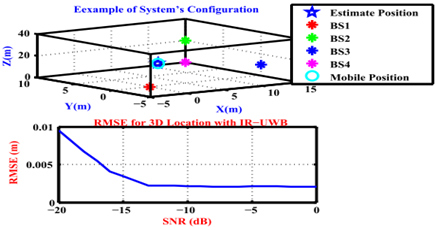 We continue our research on the realization of real-time processing for ULB communicating radar systems, especially on FPGA circuits. The challenge is to realize calculations at frequencies higher than 1 GHz. This type of signal is able to pass through walls, we have started a series of tests to evaluate the performance of the radar in terms of recognition of detected objects.