We have designed and developed of a new approach for measuring conductance (up to one million molecular junctions) with a single C-AFM image. In this approach, nanodot-molecule junctions (NMJ) are fabricated from a large array of sub-10 nm single crystal Au nanodot electrodes. Each individual NMJ consists of less than one hundred molecules. Typically, 2000-4000 NMJs are measured in a few μm2 C-AFM image. Conductance histograms and 2D histograms of the current-voltage (I-V) curves are easily extracted from these measurements. This approach has led to several advances:
(i) Demonstration that the number and respective amplitudes of the conductance peaks depend on the molecular organization in the junctions and the atomic structure of the nanoelectrodes. Experimental determination of the energy position of molecular orbitals as a function of the applied C-AFM force, in good agreement with ab-initio calculations, and highlighting the role of interface dipoles (reorientation of the Au/molecule interface dipoles). [K. Smaali et al., Nanoscale (2015)].
(ii) Original determination of intermolecular interaction energies π-π from a detailed analysis of conductance histograms of the molecular junctions, combined with nano electrochemsitry, mesoscopic electron transport model and ab-initio DFT calculations [J. Trasobares et al., Nano Letters (2017)].
(iii) Considering the dimensions of these molecular nanojunctions inducing a reduction of parasitic capacitances, and a very good conductance induced by the reinforcement of intermolecular π-π interactions, first demonstration of a molecular diode operating at 17 GHz, and estimation of a cut-off frequency at 500 GHz. The combination of a large array of single-crystal gold nanoelectrodes and an interferometric scanning microwave microscope (iSMM) is the key feature to perform a statistical study of the microwave transport properties on hundreds of molecular diodes. [J. Trasobares et al. Nature Comm. (2016)]. This result opens the door for the development of rf-organic diodes for ambient electromagnetic energy harvesting, and spin excitations in molecular junctions made of magnetic molecules (see perspectives).

In the continuation of our work on the design and synthesis of photo-addressable switch molecules (azobenzene derivatives) with a high electrical conductance ratio between “cis” and “trans” isomers (7,000) [K. Smaali et al., ACS Nano (2010)], we have integrated these molecules, and also redox molecules (thiophene derivatives), in organized gold nanoparticle networks (NPSAN : Nanoparticles self-assembled networks) and demonstrated a non-volatile optoelectronic memory effect [Y. Viero et al., J. Phys. Chem. C (2015)], a negative differential resistance effect [T. Zhang et al., J. Phys. Chem. C (2017)]. When these NPSANs are connected with multi-electrodes (6 to 8), we have demonstrated that these systems allow the realization of optically reconfigurable logic functions and the implementation of unconventional calculation circuits such as “reservoir computing” a typical example of the “evolution in materio” concept. We have also demonstrated the performance improvements of these NPSANs using graphene nanoelectrodes [Y. Viero et al., Adv. Func. Mater. (2018)]. 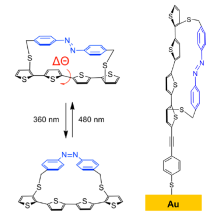 We have also reported the electron-transport properties of a new photoaddressable molecular switch. The switching process relies on a new concept based on linear π-conjugated dynamic systems, in which the geometry and, hence, the electronic properties of an oligothiophene chain can be reversibly modified by the photochemical trans−cis isomerization of an azobenzene unit fixed in a lateral loop. Electron-transport measurements through self-assembled monolayers on gold, in contact with an eGaIn top contact, showed switching with a conductance ratio of up to 1,000. Ab initio calculations were used to identify the most energetically stable conformations of the molecular switch; the corresponding calculated conductances qualitatively explain the trend observed in the photoswitching experiments [S. Lenfant et al., J. Phys. Chem. C (2017)].

We recently reported the synthesis of the organic-inorganic polyoxometalate hybrids [PM11O39{Sn(C6H4)C≡C(C6H4)N2}]3- (M = Mo, W) endowed with a remote diazonium function together with their covalent immobilization onto hydrogenated n- Si(100) substrates. Electron transport measurements through the resulting densely-packed monolayers gives a mean tunnel energy barrier of 1.8 eV and 1.6 eV, for the Silicon-Molecules-Metal (SMM) junctions based on the polyoxotungstates (M = W) and polyoxomolybdates (M =Mo), respectively. This follows the trend observed in the electrochemical properties of POMs in solution, the polyoxomolybdates being easier to reduce than the polyoxotungstates, in agreement with lowest unoccupied molecular orbitals (LUMOs) of lower energy. The molecular signature of the POMs is thus clearly identifiable in the solid-state electrical properties and the unmatched diversity of POM molecular and electronic structures should offer a great modularity [M. Laurans et al., Nanoscale (2018)]. 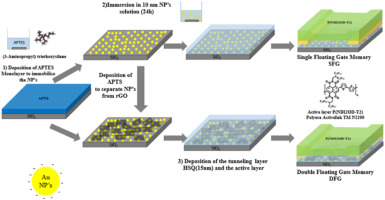 Organic diode rectifier have attracted a lot of attention recently for RF energy harvesting, and much effort has been applied toward extending the ultra-high frequency range. An important parameter that should be considered for diodes used in RF rectifier is the turn on voltage, which should be low to overcome the problem of the low voltage generated and power extracted from energy harvesting. In this work, we focused on pentacene organic rectifier with high rectification ratio and low threshold voltage obtained by tuning the work function of gold with a self-assembled monolayer of PFBT and optimizing the thickness of the organic layer. We demonstrate a high rectification ratio up to 1E7 and a very low turn on voltage as low as 20 mV. Flexible rectifier diode have been also fabricated in release paper WO84, high rectification ratio of 1E6 was obtained even after bending of the device. The pentacene based rectifier diodes were also demonstrated to operate at more than 1GHz. This provides a great potential for fabricating high-performance organic flexible diodes and opens the way for the development of high frequency response using organic materials  [K.Ferchichi et al., Eur. Conf. Org. Electron. (2018)].

In 2010, we demonstrated the concept of synapstor (synapse transistor) that the main functionalities of a biological synapse are achievable with an organic hybrid transistor (organic semiconductor and gold nanoparticles) [F. Alibart et al. Adv. Func. Mater.  (2010), F. Alibart et al., Adv. Func. Mater. (2012)]. The encapsulated gold nanoparticles are fixed in the transistor channel by means of an organic monolayer and are covered with the organic semiconductor. The transistor transconductance is then coupled to a nanoparticle memory effect that mimics the functioning of a biological synapse when it transmits potential action (voltage pulses) between two neurons. Recently, we extended these results with the demonstration of the operation of these synapstors at very low voltages (50 mV), in an electrolyte-gated configuration [S. Desbief et al. Org. Electron. (2015); M. di Lauro et al., Adv. Electron. Mater. (2017)], and we demonstrated that they can be interfaced with living biological neurons [S. Desbief et al. Org. Electron. (2016)], which made these devices prone for a possible brain/neurocomputer interface. 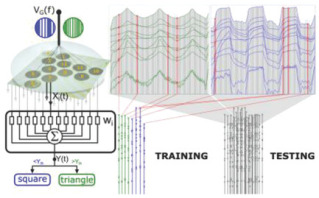 Very recently, we investigated iono-electronic materials and devices, in which electronic conduction is controlled by ion dynamics [S. Pecqueur et al., Org. Electron. (2018)]. We have demonstrated pattern recognitions in a network of OECTs (organic electrochemical transistor) interacting in a common electrolyte [S. Pecqueur et al., Adv. Electron. Mater. (2018)]. It is an innovative approach that relies both on the intrinsic physics (ionic dynamics) of OECTs and on the neuromorphic calculation concepts of the “reservoir computing” type (i.e. a spatio-temporal data processing in a network with complex dynamics and strong non-linearities) to demonstrate learning and event classification. We show that this approach makes it possible to overcome the high level of variability obtained by the upward manufacture of OECTS from a new electropolymerizable polymer, which allows individual functionality of ionoelectronic devices and stability of the material in the electrolyte.

Nanodevices, or, more precisely, memory or memristive devices, have been proposed for the implementation of synaptic functions, offering the required features and integration in a single component. We have demonstrated that the basic physics involved in the filamentary  switching of electrochemical metallization (Ag/Ag2S/Pt) cells can reproduce important biological synaptic functions that are key mechanisms for information processing and storage [F. Alibart et al., Nat. Comm. (2013)]. We have highlighted that the transition from short- to long-term plasticity is a direct consequence of filament growth (i.e., increased conductance) in filamentary memory devices. We have shown that a more complex filament shape, such as dendritic paths of variable density and width, can permit the short- and long-term processes to be controlled independently. Our solid-state device is strongly analogous to biological synapses, as indicated by the interpretation of the results from the framework of a phenomenological model developed for biological synapse [S. la Barbera et al. ACS Nano (2015); S. la Barbera et al., Sci. Reports (2016)]. We also contributed to the demonstration of bio-inspired stochastic computing using binary CBRAM (conducting bridge random access memory) synapses [M. Suri et al., IEEE Trans. Electron. Dev. (2013)].

We report the fabrication and electron transport properties of nanoparticles self-assembled networks (NPSAN) of molecular switches (azobenzene derivatives) interconnected by Au nanoparticles, and we demonstrate optically-driven switchable logical operations associated to the light controlled switching of the molecules. The switching yield is up to 74%. We also demonstrate that these NPSANs are prone for light-stimulable reservoir computing. The complex non-linearity of electron transport and dynamics in these highly connected and recurrent networks of molecular junctions exhibit rich high harmonics generation (HHG) required for reservoir computing (RC) approaches. Logical functions and HHG are controlled by the isomerization of the molecules upon light illumination. These results, without direct analogs in semiconductor devices, open new perspectives to molecular electronics in unconventional computing  [Y. Viero et al., Adv. Func. Mater. (2018)].

This activity is dedicated to chemical synthesis of materials designed for electronics. The principal activity of the platform includes the surface functionalization by molecules for molecular electronics (molecular switches, diodes, memories, sensors…) and nanobiotechnologies. The Self Assembled Monolayer technique (SAM) is used to provide specific physico-chemical properties to various surfaces, such as wettability, encapsulation or chemical reactivity. Synthesis, assembly or grafting of nanoparticles on different substrates are also realized.