Research Activities of the MITEC Group

The research activities within the MITEC group are divided into several themes:

The study of thermoelectric microconverters is based on the expertise developed for several years in the group on thermal and infrared microsensors based on original geometries and technologies from poly-silicon.

The microconverters will take advantage of the Seebeck effect or TE thermoelectric effect (heat/electromotive force conversion). One objective is to realize them from thin films and in planar technology by adapting different geometries of heat flow channelling.

The standard poly-Si, mentioned above, has an excellent TE power (Seebeck > 200 μV/°K) but its good thermal conductivity limits its efficiency (heat/f-e-m conversion performance). This efficiency is usually measured by a figure of merit integrating the thermal and electrical conductivities and the Seebeck coefficient: concrete advances can be achieved if the first one can be drastically reduced while the last two remain intact (or slightly degraded). Such evolutions are commonly incompatible in the same medium.

One approach consists in increasing the density of certain categories of interfaces (both barriers to the propagation of phonons but also "passers" for charge carriers). More generally, it is a question of playing both on the band structure, the position of the fermi level and on the engineering of charge transport, phonons and entropy. This can be achieved by changing the dimensionality(s) of the medium, in 1 to 3 dimensions and in a structured or disordered way; in fact by modifying the characteristics at the nanoscale.

Alternatives to the use of poly-Si are being considered and various semiconductor compounds are being evaluated. A first objective is to increase the TE conversion efficiency in planar thermopiles built on a matrix geometry of material/gold or P/N thermocouples.

Heat flow measurements can lead to many applications such as non-contact temperature measurement, human presence detection or real-time recording of enthalpy flow related to phase changes.

However, such measurements are far from being widespread as there are no inexpensive flux sensors available. This is why we have designed unencapsulated microsensors, based on an original patented concept taking into account standard silicon technologies to generate a periodic structure of thermal conductivity discontinuities on the surface of a silicon wafer. The incident thermal flux, of radiative, conductive or convective origin is then converted into a periodic temperature field. A planar thermopile made of many thermoelements allows to transform this temperature field into an electromotive force proportional to the thermal flux.

One of the most important features of this paradigm is the ability to produce sensors of various shapes and sizes.

Entirely developed at I.E.M.N., these new heat flux micro-sensors are made of several hundreds of polysilicon/gold microthermocouples, realized on a substrate in which porous silicon boxes have been previously processed. Since no encapsulation is required, the sensor can be sized according to the application (typically 3×3 mm2 to 10×10 mm2). A mathematical model was established and validated to optimize the sensitivity according to the dimensions of the microthermocouples and the porous silicon boxes.

These very robust quasi-monolithic planar microsensors can be used in scientific equipment as well as in industrial and consumer applications. The very high sensitivity (0.15 V/W for a 5×5 mm2) makes it possible to measure extremely small amounts of heat such as the enthalpy of evaporation of water droplets.

The great versatility of these sensors has made it possible to develop new measurement methods and the corresponding devices have been developed: non-contact measurement of temperature in a dirty environment, detection of water through a metal wall, characterization of ultrasonic transducers...

The infrared microsensors can also operate without encapsulation thanks to a unique thermally balanced design. The infrared absorber (polyimide) and the reflective zones (gold) allow the conversion of the infrared radiation flow into a periodic temperature field. A thermopile made of a series of 300 polysilicon/gold microthermocouples suspended on SiO2/Si3N4 membranes converts the temperature field into electromotive force. These micro-sensors have been realized in a unitary way and in the form of 3×3 and 5×2 pixel arrays.

The relatively large size of the pixels (3×3 mm2 currently) make it possible to associate them with a Fresnel lens for IR at low cost. A first prototype of low resolution IR camera has been developed to answer to general public applications such as remote home monitoring (demonstration video). The specific detectivity (D*= 2.107 cm.Hz1/2.W-1) for a 3×3 mm pixel2 is sufficient for this application. Compared to pyroelectric arrays, the main advantage of these sensors is the ability to detect stationary persons.

Acknowledgements: Most of these works have been supported by "OSEO-ANVAR" and the "Nord-Pas-de-Calais" Region.

To measure temperatures, invasive sensors such as thermocouples and fiber optics cannot be easily introduced into frozen or very high temperature products. In addition, they provide point-in-time information. Infrared instruments provide superficial information and MRI is possible but requires expensive equipment. Microwave radiometry is a solution to determine the temperature inside dissipative materials.
Radiometric temperature measurement is based on the reception of thermal noise naturally emitted by the materials. For microwaves, the power of the noise signals is directly proportional to the temperature of the materials. Thus, the temperature of a body can be determined without contact by receiving the noise signals with an antenna connected to a microwave radiometer.
The radiometer used allows to obtain a radiometric measurement independent of the gain of the amplification chain and the reflection coefficient at the sensor input. The insertion losses of the measurement chain are also taken into account by a calibration process. The two radiometric devices developed by the group operate around 1.575 GHz and 3.3 GHz and allow non-contact measurements of the radiometric temperature with low fluctuations, of the order of 0.1°C. 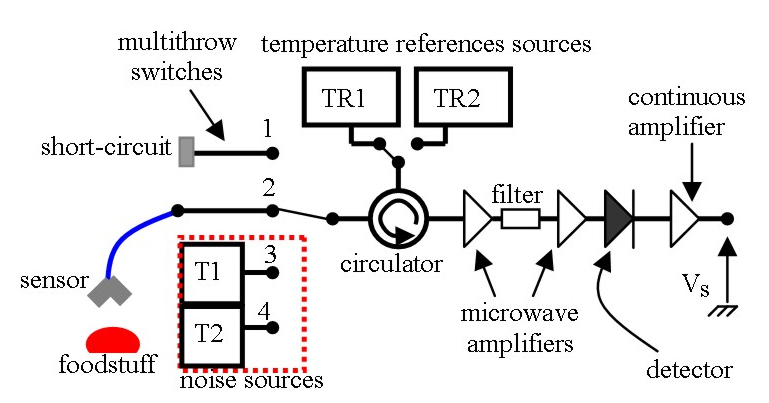 Radiometry can be coupled to microwave heating as in the process of heating at high temperature metal-ceramic powders used for the manufacture of mechanical parts by sintering or during the vitrification of toxic waste. In the medical field, radiometry is often coupled with microwave hyperthermia which consists in raising the temperature moderately above physiological norms to cause cell destruction or to potentiate the therapeutic effects of other techniques.
For the theoretical studies, we model the physical phenomena by using for the electromagnetic calculations models such as FDTD or finite elements. The thermal aspect involves solving the heat equation in order to determine the thermal mapping in the targeted materials (microwave heating and/or radiometric measurement). The presence of a change of state in materials leads to significant variations in thermal and electromagnetic (or even mechanical) properties as a function of temperature and time. Multiphysics simulation is then imperative. 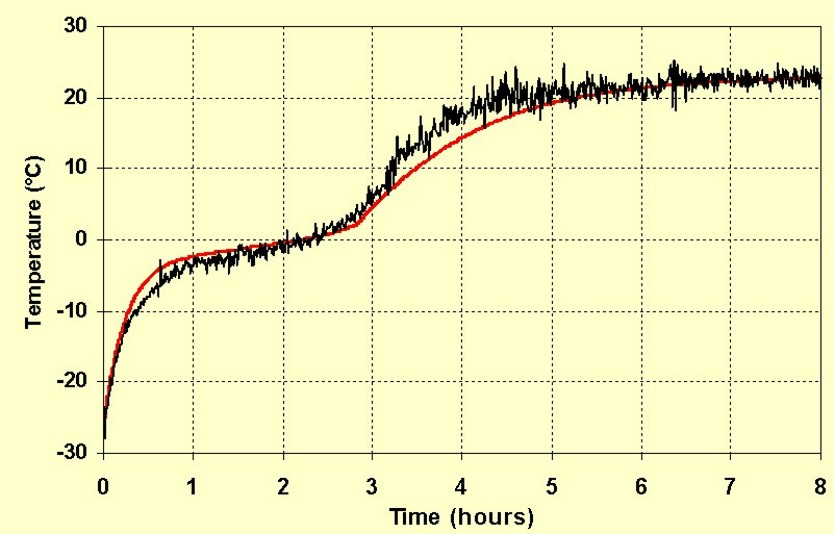