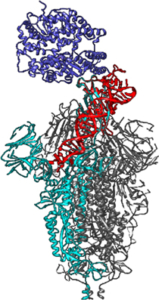 In a project implicating experimental and modelling teams at LIMMS (Tokyo), IEMN, UGSF and CANTHER CNRS units (Lille), we are using large-scale molecular simulations to design nanoscale quantum-dot sensors, aimed at recognizing the “spike” protein and the N-protein of the SARS-CoV-2 virus, by means of ssDNA aptamers. Very cheap to produce in large quantities, extremely biocompatible with practically no adverse effects, aptamers are capable of specifically binding to targets and modulating or blocking their activity, just like natural antibodies. Generated by an in-vitro selection process from pools of random sequence oligonucleotides (the SELEX technique), a typical aptamer is 10-30 kDa in size (about 30-60 DNA or RNA nucleotides), it binds its target with sub-nanomolar affinity, and can discriminate against closely related targets. Our molecular simulations elucidate the microscopic details of the DNA interaction with key proteins of the virus. Furthermore, in the framework of CoVid-19 innovative therapies, we are investigating the possibility that the same DNA aptamers could actively block, or at least slow down, the “opening” mechanism of the S-protein, thereby suppressing or strongly reducing the cell-receptor binding, which is the key lead to virus infection.

This work is supported by the national supercomputing initiative GENCI.