The secret of eternal bubbles, discovered by IEMN researchers

Bubbles, eternal, which never burst, or almost ... it makes you dream! 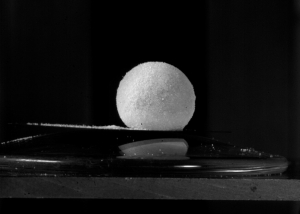 This is the challenge taken up by Aymeric Roux, Alexis Duchesne and Michaël Baudoin of the Aiman-Films group, who discovered the recipe for bubbles that can maintain their spherical shape and remain liquid for 465 days. This performance was achieved by replacing the soap in a soap bubble with microparticles and the water with a mixture of water and glycerol. The microparticles help maintain the bubble structure by limiting drainage and the absorption of ambient moisture by glycerol compensates for evaporation, which are the two main causes of bubble bursting.

This record of longevity "which does not lack air" (Cf. Le Monde, 25/01/2022) has been particularly praised in the scientific press and in many media.

michael.baudoin@univ-lille.fr
The discovery of eternal bubbles by IEMN researchers hailed by the scientific...