A great success for the 9th Plenary Conference of the GDR ONDES!

On the left, Éric Lheurette, Deputy Director of GDR ONDES

The 9th Plenary Conference of the GDR ONDES took place on 30 November and 1 December at the Learning Center of LILLIAD on the Villeneuve d'Ascq scientific campus. It was a great success!
Éric Lheurettedeputy director, expresses his great satisfaction: "During the successive periods of confinement, the GDR ONDES has of course continued its mission of animation through webinars on the Youtube which were very well received. Today, we are pleased to have been able to offer this opportunity to meet during the Plenary Conference. The scientific and human exchanges were particularly appreciated according to the participants' feedback.

The Plenary brought together 224 people from 57 different laboratories, in addition to industrialists (Rohde & Schwarz, Airbus, Thales, Ansys, ...)
The plenary presentation was given by Michel Campillo of the ISTerre Institute and focused on the physics of seismic waves.
This was followed by 18 invited presentations in the 6 thematic groups and poster sessions, where the young researcher community (PhD students and post-docs), happy to be able to exchange live, was very well represented.
The event also included an exhibition of measuring instruments from the the ASSAP collection presented by former IEMN members (Jean-Claude Pesant, Christian Druon) and organised by Sophie Braun and Patricia Lefebvre. 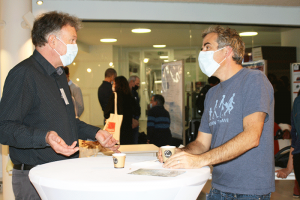 A short history of the GDR

The GDR ONDES was created at the initiative of Daniel Maystre (Institut Fresnel) in 2002.
Its objective is to federate the entire French wave community, including academic laboratories and industrial partners. It covers the scientific fields of electromagnetic waves (from low frequencies to optics) and acoustic waves.
Its organisation is divided into 6 thematic groups and an Industrial Partners Club. It conducts activities in the form of multi-annual theme days and webinars.