Spotlight on a researcher of excellence at the IEMN

Christophe Lethien, a teacher-researcher at the IEMN, has been named a senior member of the Institut Universitaire de France in the Innovation category for his work on miniaturized energy storage. This is no mean feat! First of all, this is a first for the laboratory in the senior category!
Secondly, the application file is impressive: evaluated by an international jury and accompanied by two letters of recommendation, it includes several important sections: a research report and a teaching report; an ERC pre-project and a pedagogical innovation project must also appear in the file.

This award is the result of a bold career path and strategic research patiently carried out. After a thesis at the IEMN in 2004 in optoelectronics and photonics, under the supervision of Jean-Pierre Vilcot (DR CNRS), Christophe was recruited for three years at the Royal Military School of Brussels as a researcher in photonics. In 2007, it was time for our young lecturer to move to the CSAM group (IEMN).

« I then learned how to make energy storage micro-devices by starting from a blank sheet of paper on the fabrication and characterization side! My new theme started to swarm between 2012 and 2015, which allowed IEMN to integrate the French Network on Electrochemical Energy Storage (RS2E). In 2017, I obtained a Congé Recherche et Conversion Thématique (CRCT) with a mobility in Nantes to strengthen my knowledge in electrochemistry. » 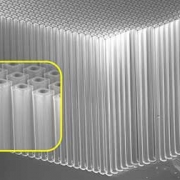 Array of 3D micro-tubes machined in a silicon substrate. This « carpet » of micro-tubes is then covered with Pt (current collectors) and MnO2 (active materials) IEMN/IMN

It is with restrained pride that he tells us his great satisfaction: « it will allow me to do nice things ». Indeed, the IUF status from October 1, 2021, will provide him with financial resources of 15,000 euros for research during five years and a teaching release of 2/3 of his annual quota.

Our IUF member plans to create components incorporating new materials such as ternary transition metal nitrides which are 3-element alloys with one element being nitrogen (N). He plans to integrate these new materials into other storage devices such as electrochemical or electrolytic micro-capacitors and micro-supercapacitors (MSCs).

« I will be able to strengthen our results. I have put together the file, paying great attention to the human resources aspect. A great team of dynamic young people is already involved in this project, and others will be joining us soon. Moreover, the prize reinforces the innovation part brought by Maxime. »

Maxime Hallot, Christophe’s former PhD student at IEMN won a national C’Nano award in 2020 for his thesis work and its applications in the field of micro energy storage. Maxime has designed miniature batteries based on an alloy of lithium materials. They are very solid and are developed in 3D architecture, for a large storage capacity. His innovation has led to a patent application via the RS2E, of which IEMN is a member, and a startup is planned.

« Our development time in research is long and we try to devote time to the collective, so when a young person like Maxime wants to bring an ambitious project to maturity, we are behind him 100%! Moreover, all this reinforces the visibility of our work. »

Christophe also thanks the RS2E for the support shown since his arrival in this network.