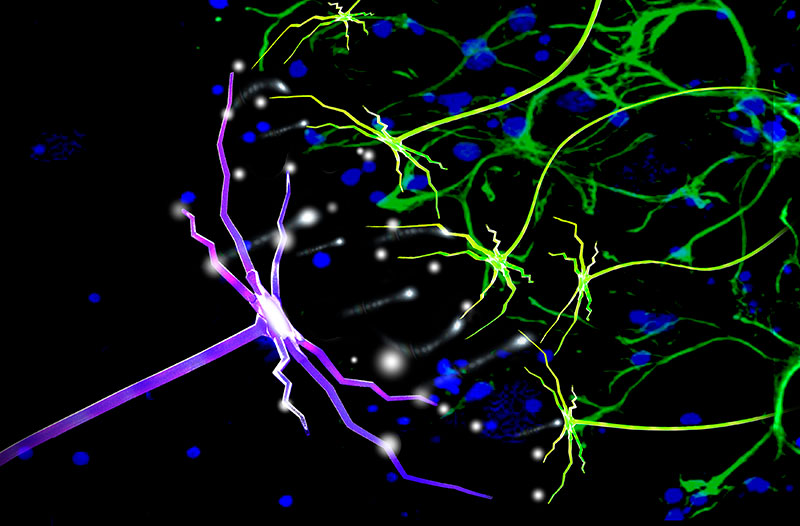 What could tomorrow’s electronics look like? One very attractive possibility would be to draw inspiration from biological systems. In particular by reproducing the key characteristics of the brain, both in terms of manufacturing and functioning. The possibility of organizing billions of neurons to achieve systems capable of seeing, feeling and hearing appears fascinating and has motivated recent work by IEMN researchers, published in the journals Nature Communications and Advanced Sciences.

In the framework of the ERC-IONOS project, IEMN researchers have investigated the possibility of growing organic materials by pulsed electro-polymerization to reproduce the dendritic growths that are responsible for the structuring of neural networks. This demonstration allows to reproduce a key property of biology: structural plasticity. And the story doesn’t end there, because these same dendritic materials can also reproduce key signal processing elements in biology such as synaptic plasticity and dendritic integration.

Structural plasticity is the mechanism that allows neural networks to imprint a 3D topology specific to a single multi-sensory experience, in order to efficiently process information. In artificial neural networks, topologies remain a major area of optimization, both at the software and hardware level. Indeed, the mechanisms allowing biology to self-organize and the rules defining optimal topologies remain largely misunderstood and are addressed empirically in the artificial world. A differentiating aspect between biology and electronics is the ability of biological systems to assemble themselves in a bottom-up manner (the basic elements are defined first, the function is obtained in a second time), while electronics is largely top-down (the functions are predefined upstream, and the components organized to reproduce them). Using pulsed electro-polymerization of PEDOT:PSS, IEMN researchers have shown that it is possible to finely control the structure of conductive dendrites in water.

The morphologies obtained can be modified according to the chemical environment and the experience of accumulated electrical stresses to reach a variety of morphologies reminiscent of neuronal dendritic structures. This approach allows us to envision an electronic system in perpetual structural evolution, in perpetual mutation, where the concepts of memory and learning derive more from the physical capacity of a network to form new connections, rather than that of transporting information in a binary manner between components fixed on a substrate.

Dendritic topology is far from being the only ingredient used by biology to process neural signals: the transmission of information in neural networks is weighted by synapses that allow the implementation of the key function of learning. The artificial dendrites of the IEMN researchers can also be used in this perspective: when these artificial dendrites interconnect, these materials behave like real synaptic components. Indeed, PEDOT:PSS is well known for its electronic and ionic conductor properties allowing to couple the transport of its two charge carriers (more precisely the polarons of the polymer and the solvated ions of the electrolyte). This property allows the use of PEDOT:PSS as an organic electrochemical transistor (OECT). IONOS researchers have shown that the dendritic structures obtained by electro-polymerization behave like OECTs, and can therefore modulate the signals transmitted between two artificial neurons connected by an organic fiber. It is then possible to realize key functions of synaptic plasticity such as short-term plasticity (STP) and long-term plasticity (LTP).
This approach proposes a new material substrate for the implementation of artificial neural networks and opens new perspectives, both in engineering and systems sciences and in information sciences.