On June, 19th 2020, Dr. Marco Miniaci received the Marie Skłodowska-Curie Action (MSCA) award by the Croatian Presidency of the Council of the European Union. The prize awarded experienced researchers showing how their participation in MSCA has a positive effect on their careers, including gained new knowledge and skills, boosting international networks, employment prospects and professional opportunities in academic and / or non‐academic sectors.

The objective of MSCA is to strengthen the creative and innovative potential of researchers wishing to diversify their individual skills through training, advanced international and intersectoral mobility. 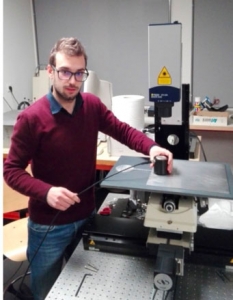 Dr. Marco Miniaci received the prize presenting his project « HARPOCRATES – Smart phononic crystals for aircraft noise reduction », carried out at the UMR 6294 du CNRS and supervised by Professor Bruno Morvan at the Laboratory of Waves and Complex Media of Le Havre, and funded within the framework of an « Individual European Marie Skłodowska-Curie fellowship ».

The project HARPOCRATES has been conceived in the framework of the development of a new sound insulation system to attenuate aircraft noise emissions, in line with the upcoming EU policies on noise control in transport which, over the years, requires vehicles to be more and more silent.