Ultra broadband emitters of terahertz radiation exploiting the dynamics of the spin (rather than the charge) of electrons in metallic spintronic multilayers, have in the last few years emerged on the research scene as flexible and robust THz sources with many properties unattainable by more conventional technologies. Especially unique is their ability of THz polarization switching through magnetization control of the ferromagnetic layer. At IEMN we have proven a very efficient way to set this magnetization direction (and therefore the emitted THz polarization) on demand without power loss at any chosen value over a full 2π angle. Such a source can improve significantly applications in THz polarimetry and ellipsometry by avoiding the need for external polarizing elements. A fast control of this technique will furthermore allow to demonstrate modulated THz emitters at unprecedented speeds. 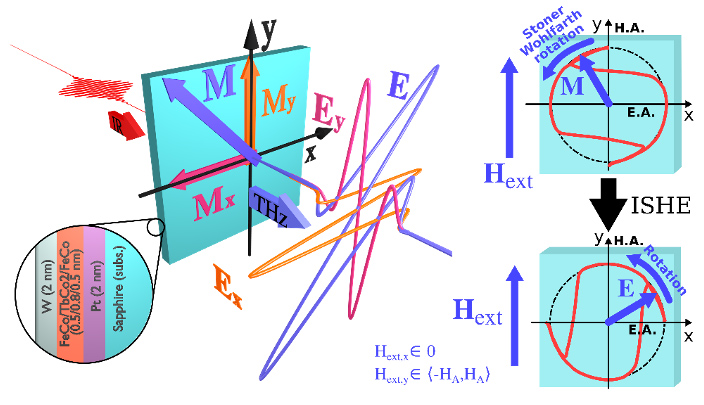 THz technology has found applications that are nearing market implementation, such as nondestructive spectroscopy, chemical sensing and fast wireless communications. Control and flexible manipulation of the polarization state of a THz beam is in this context an important functionality that is still not straightforwardly realized. THz polarization states can be controlled by Fresnel-rhomb wave plates, wire-grid polarizers, birefringent wave plates, or active metamaterial-based devices. While these approaches are robust and can sometimes be actively controlled, they are most often either bulky or narrowband and present important insertion losses. Controlling the emitted polarization state directly upon generation is in this sense a more logical approach. This is precisely what the novel type of Inverse Spin Hall Effect THz emitters easily allow to achieve.

Terahertz emission by spintronic effects was first demonstrated only about 5 years ago by the Kampfrath group at the Physics Department of the Freie Universität in Berlin. The emitter’s configuration is nothing else but a thin-film metallic nanometric stack consisting of layers of a ferromagnetic metal (FM) and a normal metal (NM). After optical excitation of such a FM|NM heterostructure, an ultrafast spin current flows across the interface from the in-plane magnetized FM into the adjacent NM layer. This ultrafast out-of-plane spin current is then converted into an in-plane charge current through a spin-to-charge-current conversion (S2C) process. If the NM consists of a heavy metal like Pt, S2C predominantly happens by spin-orbit interactions in the NM layer by the inverse spin Hall effect (ISHE).
Simply stated ISHE will deviate a carrier current in a transverse direction depending on its spin state. Therefore if the carrier current is predominantly polarized in a certain state, this injected out-of-plane spin current will transform into a transverse charge current.
And since all involved physical processes (hot carrier excitation by IR pulses, diffusion and injection of spins, and relaxation and scattering in the NM) have characteristic time constants of the order of 10’s of fs, the resulting transient charge current is in the sub-ps range and emits electromagnetic waves with THz frequencies. A remarkable and essential feature of the physics of the ISHE, is that the generated current is fundamentally always orthogonal to both the injected spin current and the spin polarization state !
Therefore controlling the magnetization direction of the spin injector (i.e. the FM layer), will directly determine the polarization state of the emitted radiation.

In the framework of a FET Open project (s-NEBULA FET Open Grant No. 863155 2020-2023,
https://s-nebula.eu), IEMN is partnering with leading French, German, Swedish and Czech research groups studying this new THz spintronic technology. The THz photonics team and the AIMAN-FILMS team are jointly leading the WP on improving the source functionalities of the demonstrated spintronic configurations. A specific expertise that we are bringing to this project is the development of engineered ferromagnetic multilayers with specific magnetic properties. Up till now spintronic THz emitters (STE) have used isotropic soft magnetic materials as spin injectors, more specifically CoFeB alloys. These ferromagnets have the advantage of being easily saturated in any in-plane direction by setting a weak external magnetic bias field in the desired direction. In view of the above, CoFeB-based STE’s can thus generate a wanted THz polarization by appropriately turning the magnetic bias field to desired direction. Such a “mechanical” setting of the polarization is not only cumbersome but can moreover hardly be expected to allow fast control of the magnetization.
In magnetism it is known that if a strong uniaxial anisotropy is created within a FM the alignment of the magnetization of a single domain of such a material will be the result of an energy balance between the anisotropy axis and the direction of the external magnetic bias. This results in the so-called Stoner-Wohlfarth mechanism. This predicts that the magnetization of the domain will rotate uniformly over a full circle by only applying an external field perpendicularly to the anisotropy axis. Such a layer used in a STE would thus allow a very efficient control of the THz polarization direction ! The polarization direction would be set by the value of a fixed magnetic field without needing to change its orientation.

This is precisely what researchers of the AIMAIN-FILMS and THz Photonics group have achieved. Specifically they have demonstrated that a carefully chosen thin film multilayer combination of soft magnetic FeCo alloy with hard magnetic TbCo alloy, creates an effective ferromagnetic stack that has a pronounced uniaxial behaviour needing only limited strengths of magnetic bias to achieve full 360° Stoner-Wohlfart rotation. From a magnetic point of view this was not a surprising result. The true impact of this work lies in the demonstration that such a layer achieves the same efficiency as a “classical” CoFeB layer when used in a spintronic THz emitter. Experiments have shown that using such an engineered multilayer leads to nearly as powerful THz signals as with optimised CoFeB alloys. On top of that, we have shown that this strength is maintained over the whole Stoner-Wohlfart polarization rotation cycle by sweeping an external magnetic bias along a single axis between values as low as 100 Oe (or 10mT). 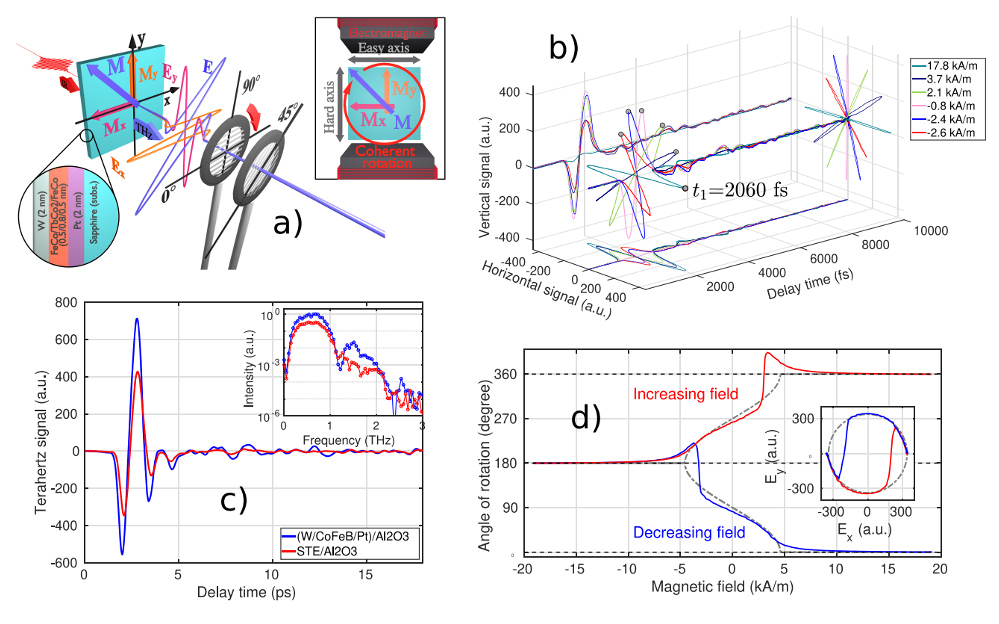 This quasistatic setting of the THz polarization direction of a STE has a profound impact on the usability of these emitters. One can now imagine a STE integrated with a tiny single-axis electromagnet that will emit a certain THz polarization by « just » setting the current of the electromagnet to the desired value.   In other words, an efficient broadband THz polarimetric source becomes a reality. The impact of the easy polarization control of this emitter type has several other far reaching applications.
In this work the Stoner−Wohlfarth type magnetization control was mainly quasistatically exploited. Dynamic fast control of the reversible magnetization is imaginable by operating the uniaxial anisotropic emitter near the spin reorientation transition (SRT), where the magnetization along the easy axis moves unhindered by an energy barrier under small amplitude RF excitations. Modulation speeds well beyond 10MHz are expected. Such a wideband fast-modulated STE with near 100% modulation index is a missing component for wireless THz datacom but could also find use in low-noise modulation ellipsometric THz spectroscopy. Furthermore, by cascading such emitters and exploiting the full 360°polarization control, any chosen elliptical THz polarization state can be created at will if a precise phase control between both cascaded emitters is implemented.

Read more about this work in the ACS Photonics paper “360°Polarization Control of Terahertz Spintronic Emitters UsingUniaxial FeCo/TbCo2/FeCo Trilayers” (doi: https://doi.org/10.1021/acsphotonics.1c01782) and on the FET Open project on https://s-nebula.eu