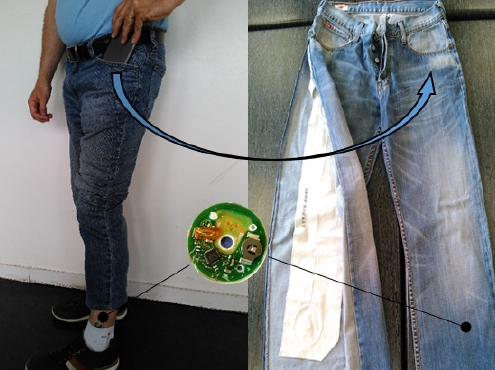 Nowadays, individuals carry a smartphone with them everywhere. Other objects may need to be carried on them such as physiological sensors, cameras, access cards, …. Our research exploits the potential energy stored in the battery of a smartphone by establishing a textile bridge between it and these other small objects. Associated with contactless technology, an embroidered structure will trap the magnetic field emitted by the smartphone located in a pocket. It will then return it to any place on the garment to power a target object.

Two difficulties are holding back the implementation of the Internet of Things. The ability to communicate between objects on the one hand and the availability of energy sources on the other.  Today, individuals carry a smartphone with them everywhere. Other objects may need to be carried on one’s person such as sensors for physiological parameters, cameras, access cards, …. Our research aims at exploiting the potential of energy stored in the battery of a smartphone by establishing a textile bridge between it and these other small objects. They are part of the ANR CONTEXT (CONnected TEXTile) project bringing together researchers from IEMN, GEMTEX (ENSAIT, Ecole Nationale Supérieure des Arts et Industries Textiles de Roubaix) and LEAT (Laboratoire d’Electronique, Antennes et Télécommunications de Nice). It includes a « high-speed data transmission » part (IEMN-DOME group) and a « power distribution » part (IEMN-CSAM group). It is this part that is discussed in the rest of this article. The simulations and measurements were carried out using the resources of the CEM and SIGMACOM platforms. The choice fell on the NFC (Near Field Communication) contactless technology which allows, at the same time, to power an object without battery and to communicate with it, at least at low speed.  However, it is limited to a few millimeters of distance. The idea is to develop energy distribution structures that will enable this technology to be used more widely in the so-called « wearable » context. Thus, the objective is to allow the smartphone to reach all low energy consuming objects by developing clothing capable of playing the role of « relay » or « coupler » between these two entities. It is important that the whole operation is « contactless » in order to definitively solve the problem of batteries that do not pass through the washing machine as well as that of the ohmic connections of the object which still represents a great weakness for all the « wearable » systems. As simple as this idea is, it is still subject to multiple pitfalls. A well-known scientific solution for contactless energy transfer is to use the principle of magnetic induction. 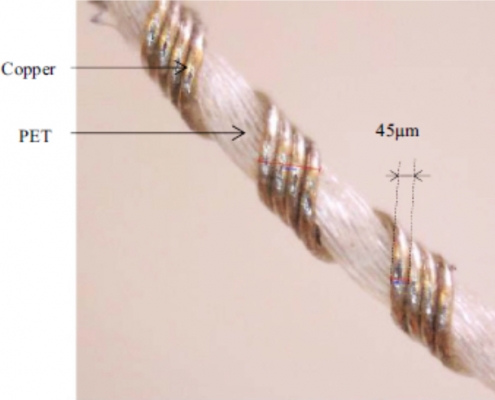 Over the last ten years, a lot of work has been done to recharge the battery of a smartphone, a biomedical device or a vehicle. These three cases are characterized by the use of a recharge source connected to the electrical energy network and the controlled placement of the elements to be connected and in particular the distance separating them. The antennas used consist of flat spiral loops made with conductors of more or less large cross-section depending on the powers involved. In the power range of the order of a Watt or less, antennas similar to printed circuit boards (PCB) made of copper tracks are commonly used for the above mentioned systems. The constraints are completely different in the wearable domain since antennas made of conductive textile wires have to be developed. The choice of these wires results from a compromise between the electrical properties of conduction and the mechanical properties guaranteeing a good flexibility and washability. In addition, they must also be able to withstand the stresses associated with the use of industrial embroidery machines. The Gemtex laboratory has contributed its skills to obtain a thread that is particularly well suited to the objective set, a thread with a Litz structure totally covered with polyamide filaments.

The system under study must be used near the human body and the health risk must be taken into account. From the point of view of exposure to electromagnetic fields, the ANSES (Agence Nationale de SEcurité Sanitaire) issued a recommendation in 2015 that special precautions be taken for people who wear active implantable medical devices (AIMDs). In addition, a 2009 report by AFSSET (formerly ANSES) specifically on the assessment of health impacts related to the use of radio frequency identification systems and, by extension, near field contactless payment systems, recommends monitoring the development of the use of this technology. In this frequency range, the terms of recommendation 1999/519/EC should be respected for the time being. This new European directive is also referred to as the « RED directive » (Radio Equipment Directive) and affects all radio equipment placed on the market since 2017. The smartphones comply with this directive and the textile structures developed in the Context project do not add any additional power.

Given the need to use the battery of a smartphone as the main source of energy, it was necessary to look for the best performance. The use of a power transfer structure by magnetic induction operating at resonance was therefore necessary. It aims to eliminate any loss of energy that would result from storing part of it in reactive elements of the distribution circuit. From an electromagnetic point of view, the use of a near field requires to consider the whole chain of transmitter (smartphone) – relay (or textile coupler) – receiver (NFC tag, sensors, …) in order to reach a resonant operation. Unfortunately, any modification of an element of the circuit (deformation of the textile guiding structure, variations in the distance separating the objects or in their arrangement) leads to a shift in the resonance frequency. This is the problem of the form factor characteristic of non-contact systems. A solution could be to choose circuit elements with lower quality coefficients in order to reduce the influence of these parameters, but at the cost of a loss of efficiency in energy transfer. The trade-offs in defining the final system will depend on the energy levels required. Depending on the case, the small objects to be powered can consume between 10mW and a few mW. Their number is also to be taken into account. 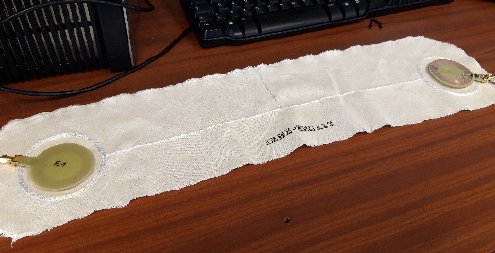 Our work has also demonstrated that it is possible to transfer energy from a smartphone to a small communicating object through an embroidered structure made of conductive threads in the total absence of electronic components and without any welding. The proposed relay (or coupler) is therefore 100% textile, which gives it a considerable advantage in the industrial processes of clothing manufacture. This is the result of numerous simulations and measurements to create inductive and capacitive elements using appropriate assemblies of the selected conductive wire. After having demonstrated the feasibility of transferring energy with a first relay composed of two textile loops connected by a certain length of parallel transmission lines, we generalized the process to relays with N loops. In this case, the difficulty to obtain the resonance and a good power transfer balance is linked to the fact that each loop is loaded or not. This load is represented by the presence of the antenna of a communicating object located in the immediate proximity of one of the loops of the textile relay. When all loops are loaded by the same object, the power transmitted by the source (the smartphone) is divided by the number of loaded loops. 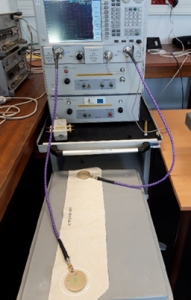 The use of an industrial embroidery process (high speed) introduces an additional constraint not imposed by the classical printed circuit board (PCB) manufacturing processes. It is impossible to make a closed electrical circuit using wires during the making of a garment. This operation would necessarily require the realization of a soldering, thus introducing a very expensive post-processing operation. Faced with this constraint, we have also demonstrated that the absence of solder in the relay introduces an opening capacity that creates a resonance frequency that may or may not be confused with that of the tuning structure with the frequency of the emission source. The opening capacity depends on the geometric arrangement of the start and end threads. A judicious choice of geometry allows us to adjust this capacity in order to make the guiding structure work at two resonant frequencies: 13.56 MHz for NFC technology and 6.78 MHz for Qi technology for inductive charging of smartphones. This would also make it possible to use a pocket-activated Qi backup battery to recharge the battery of wearables in or under the same garment.