Welcome to the Future

A new type of microelectrode (MEA) for optical and electrical characterization of a neural network in vitro.

A collaboration involving several researchers from different groups at IEMN (NCM, NBI, BioMEMS, Carbon and NAM6) as well as the LilNCog center (formerly JPARC) has led to the development of a new type of microelectrode array (MicroElectrodesArrays – MEA).
Realized in PEDOT:PSS, they are totally transparent and allow to have an electrophysiological measurement system combined with an optical reading for the characterization of neural networks in vitro.
The targeted applications extend to calcium imaging, immunomarking and optogenetics.

Microelectrode arrays (MEAs) are used to record the in vitro biological activity of neuronal cells, heart cells or brain slices. However, most commercially available MEA systems incorporate non-transparent electrodes. Recently, the development of integrated measurement tools combining both electro- and optophysiology has been of great interest for a better understanding of physiological phenomena in neural networks. The development of transparent microelectrodes allows simultaneous electrophysiological and optical imaging measurements. Some devices have already been developed and even marketed. They use ITO or graphene electrodes, but always to the detriment of impedance values (too high) or transparency (too low). A compromise is systematically necessary.

In this study, we developed optically transparent MEAs entirely made of PEDOT:PSS. They have low electrical impedance values (33 MΩ µm2), comparable to the impedance values of commercially opaque MEA devices (TiN electrodes). This new type of MEA thus paves the way for many cutting-edge applications in neuroscience: exploration of the physiological state of neuronal cells under normal or stressful conditions, study of the complexity and cellular heterogeneity of the neural network under consideration, and to perform optomodulation experiments (activation/inactivation of certain functions) of neural networks, such as optogenetic and photochemical modulation (controlled drug release).

To carry out this work, researchers from the IEMN and the LilNCog center received support from a PEPS project (M2NP), the DISTAlZ lab and the ERC CoG Ionos. 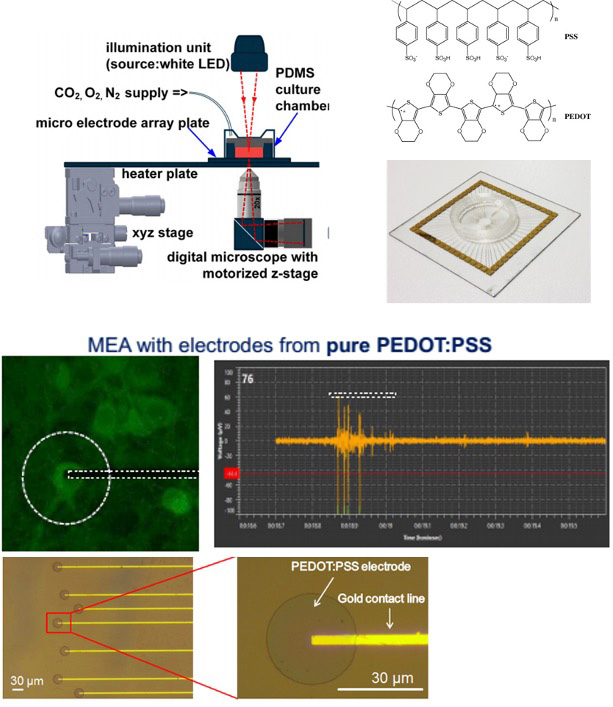