The growth of biofilms (clusters of micro-organisms adhering to a surface) is a particularly crucial issue in the food industry. Despite strict sterilization and decontamination protocols, the formation of these biofilms is sometimes unavoidable and can have pathogenic effects. A method of detection of their appearance and evolution based on ultrasonic measurements has recently been proposed at IEMN, in collaboration with INRAE. Totally non-invasive, since the detection is done through the wall of the enclosure containing the medium to be inspected, this method has shown promising preliminary results. In addition to biofilms, any change of property at the solid-liquid interface (e.g. fouling, various deposits, variations in the properties of the medium, …) can be detected.

Conventional methods of ultrasonic detection and imaging (such as medical ultrasound or industrial NDT) are based on the transmission and reception of ultrasonic echoes reflected once on the interfaces present in the medium. The analysis of these echoes makes it possible to easily obtain localization information or to produce images, provided that the interfaces or objects in question have acoustic properties that are significantly different from those of the surrounding environment (which explains, for example, the fact that in obstetrical ultrasound, it is the baby’s skeleton that presents the best contrast on the images).

On the contrary, in the application presented here, we exploit the ultrasonic multipaths (echoes reflected a very large number of times on the different interfaces of the propagation medium). If, unlike ultrasound, it does not allow imaging (since the location information is lost), this analysis technique is extremely sensitive to variations in properties, even small. These multiply reflected echoes are called « coda signals », from the Latin word coda meaning tail (they appear at the end, or « tail » of the recorded ultrasound signals).

From these ultrasonic codas, a so-called « decorrelation » coefficient is calculated. This coefficient, with values between 0 and 2, reflects the degree of dissimilarity between two signals: 0 corresponds to identical signals and 2 corresponds to signals that are unrelated to each other. In the absence of any change, the coda signals are perfectly reproducible from one measurement to another. Thus, the decorrelation coefficient between one of these signals, measured at a given time, and a so-called reference signal, measured at a previous time, is close to zero.

Conversely, when a change in properties occurs at the substrate-medium interface, variations in the reflection of ultrasound waves alter the coda signals. This results in increasing values of the decorrelation coefficient. A regular measurement of this coefficient allows then a follow-up of the evolution of a medium or an interface.

We have used this principle to detect the appearance of a bacterial deposit (biofilm) in a culture medium contained in a tank. The ultrasonic sensor is glued on the external surface of the tank and is therefore never in contact with the medium. The ultrasonic measurement is done through the wall.

The value of the correlation coefficient between the signal measured at the initial time and the successive signals at each subsequent time could be directly correlated to the growth of the bacterial population, as shown in figure 1. In this figure, graph A corresponds to the evolution of the decorrelation coefficient as a function of time when the tank contains a sterile medium (absence of bacteria and therefore no growth of biofilm on the internal walls of the tank). Graph B represents the evolution of the coefficient in the presence of bacteria in the medium. The comparison of these two graphs clearly shows that the decorrelation coefficient is very sensitive to the growth of the bacterial population which leads to the formation of a biofilm on the wall. This is confirmed by a measurement of the bacterial concentration over time (graph C). 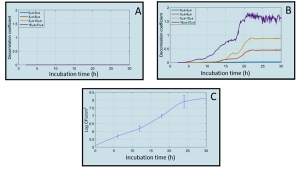 This method appears to be particularly promising for real-time monitoring of biofilm formation on site and in a non-invasive way, but also, more generally, of interface properties (fouling, various deposits, variations in the properties of the medium, etc.).
Among its limitations, we mention its high sensitivity to temperature, which can lead to false positives. This is not a problem in cases where the experimental conditions are thermostated. In other cases, methods to compensate for the influence of temperature variations on coda decorrelations are currently under study.

This method is currently the subject of the Interreg-2-Mers SOCORRO project, in which the UPHF (IEMN), INRAE and the University of Lille (UMET) are collaborating.