Marco Miniaci is a lucky CNRS laureate of the ERC Starting Grant, which provides significant funding for young researchers’ projects.

His project « POSEIDON », aims at developing « Unconventional principles for the control of underwater waves in the sub-wavelength regime » (IEMN – CNRS/University of Lille/École Centrale de Lille)

« We are like dwarfs on the shoulders of giants, so that we can see more things than them and further, certainly not because of the acuteness of our sight or the size of our body, but because we are elevated and carried high of the stature of giants ». (Bernard de Chartres).

« In this perspective, thanks to the scientific results of POSEIDON, I hope to be able to help others to see further into science, exactly as I have been able to do over the past seven years, standing on the shoulders of other researchers. This has been the secret to the conception of POSEIDON! » 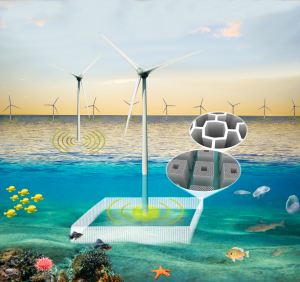 Growing interest in marine renewable energy and ocean-related human activities are the main causes of an alarming increase in the level of noise in the oceans and seas.
Nevertheless, the performance of underwater noise mitigation systems has long been (and still is) limited by the fact that dissipation is inherently low at the sub-wavelength scale.
Therefore, an efficient solution to attenuate underwater waves over low and wide frequency ranges does not yet exist. POSEIDON aims to make up for such a scientific and technological gap by developing a new class of metamaterials allowing unprecedented reflectivity and absorption of waves over wide sub-wavelength frequency ranges.

The project will explore the intimate relationship between the microstructure and macroscopic vibrational properties of a multiscale metamaterial immersed in a heavy fluid, based on the assumption that nature would offer already optimized solutions from which we should be able to draw.