Microsupercapacitors to power the Internet of Things

Supercapacitors are a solution of choice for supplying power to connected objects, especially when their electrodes are made of vanadium nitride. However, the origin of the performance of this material remains unknown. Researchers from IEMN, University of Nantes have elucidated the process and discovered a way to use it for micro-supercapacitors (MSC). This work, published in the journal Energy & Environmental Science, paves the way for extremely efficient and robust MSCs.

How vanadium nitride will power the Internet of Things

Microsupercapacitors (MSCs) are accompanying the popularity of connected objects, but their energy storage still needs to be improved in a context of increasing miniaturization. Vanadium nitride, for example, is used for large supercapacitors, but it is incorporated in powder form, a form that is incompatible with miniaturization Researchers at the Institute of Electronics, Microelectronics and Nanotechnology (IEMN, CNRS/Université polytechnique Hauts-de-France/Université de Lille/Centrale Lille), of the Institut des matériaux Jean Rouxel (IMN, CNRS/University of Nantes) and the Catalysis and Solid Chemistry Unit (UCCS, CNRS/University of Artois/University of Lille/Centrale Lille) have elucidated the process of charge storage in vanadium nitride, after having used this material for the first time in MSCs. The team was supported by the Network on Electrochemical Energy Storage (RS2E) and the Renatech network.

The researchers used an industrial process of microelectronics: magnetron sputtering. A metallic vanadium roller is subjected to ionized gases and then condensed on a silicon substrate. The material delivers an electrical storage capacity per unit volume (> 700 F cm-3) four times higher than that of nanoporous carbon electrodes. This MSC retains more than 80% of its initial performance after 50,000 charge and discharge cycles, when most MSCs wear out after 10,000 cycles. Thanks to analyses, conducted in part at the Sun synchrotron, the researchers have shown that this performance is due to the presence of a thin layer of vanadium oxide, which forms naturally when the electrodes are in contact with air. It is this layer that stores the electrical charges, without involving the rest of the material, which thus deteriorates much more slowly. 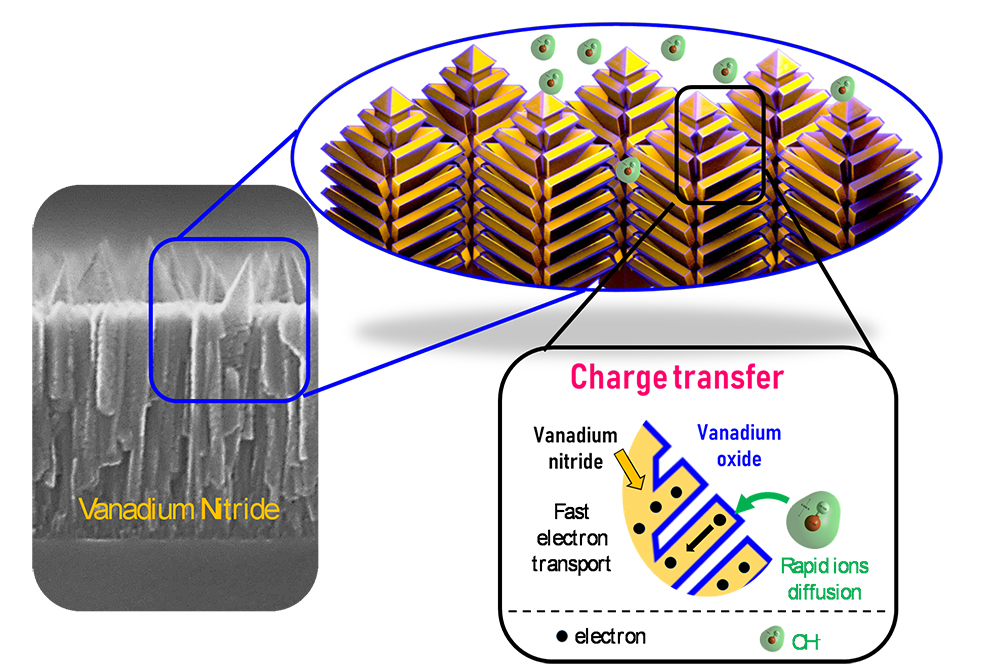 Study of the charge storage mechanism in vanadium nitride integrated as a micro-supercapacitor electrode. (c) IEMN