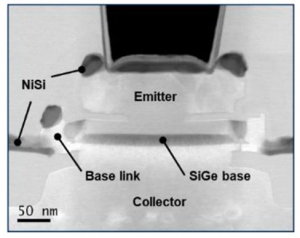 Thanks to new advances in industrial BiCMOS SiGe technologies, these technologies show great promise for millimeter band applications. In the framework of the TARANTO project, IEMN has contributed to the demonstration of the performance of the 55nm BiCMOS technology from STMicroelectronics reaching cut-off frequencies of

of 480GHz and 600 GHz respectively, as well as the design and characterization of circuits in the 30-300 GHz band

The millimeter frequency band, between 30 and 300 GHz, is attracting more and more attention in the solid state integrated circuit community with numerous applications. These include medical, security and telecom applications that take advantage of the increased spatial resolution or frequency bandwidth in this frequency range.
Historically, circuits for applications in this frequency band have been designed based on III-V technologies, because silicon-based technologies were not able to meet the noise figure and power. Thanks to the European efforts in the SiGe BiCMOS field, this technology is now able to meet the needs in the millimeter band.
This work [1] was conducted within the Power and THz teams of the IEMN, in the framework of the TARANTO project which gathered more than 30 European partners from 6 different countries. In [1], the main milestones of this project are presented, covering a wide range of results, from the design and characterization of heterojunction transistors (HBTs), through circuits to complete telecommunication systems.

of 320/370 GHz have been measured on the commercial 55 nm BiCMOS technology from STMicroelectronics. It is underlined that much better performances have been measured in terms of cut-off frequencies in SiGe technologies that do not integrate field effect transistors (CMOS) via the partner IHP (Leibniz Institute for High Performance Microelectronics). The IEMN has been strongly involved in the characterization phase of these transistors through power and noise measurements, which have been improved through the design of noise generators and impedance tuners integrated into the components to be measured. These developments have shown that not only this technology is capable of meeting the needs in the millimeter frequency band with very promising performances but also that the tools and methods of characterization implemented in the laboratory by the Power and Photonics-THz teams in collaboration with the Central Micro Nano Fabrication Platform (CMNF) are more efficient than off-chip solutions thanks to the physical proximity of the measurement elements with the device under test

Concerning the demonstrators, two examples can be cited. The first, a direct conversion mixer in W band (91-100 GHz) with +5 dB of conversion gain. This mixer has as a particularity its low power consumption, which amounts to 21.8 mW. The second, an active frequency quadrupler. This device has an output power of -26 dBm over a very wide range of frequencies between 120 and 160 GHz for a conversion gain of +4 dB.

Finally, the compact models developed during this project have allowed the design of telecommunication systems, such as a demonstrator integrating frequency multiplication, I/Q modulation, power amplification, mixing… These systems have been integrated on a PCB (printed circuit board) allowing the transmission of telecom signals at 140 GHz with an equivalent isotropic radiated power (EIRP) of 27 dBm.