The last decade has seen the discovery of many materials with extraordinary electronic properties that reflect original quantum effects induced by their dimensionality and topology. Following the example of the physical effects encountered in graphene, can these properties be induced in semiconductor materials, the main components of the microelectronics industry? This is what IEMN researchers have just shown, in collaboration with colleagues from Utrecht, Shanghai, Bordeaux and Paris-Saclay, thanks to innovative nano-technological approaches on III-V semiconductors.

When a crystal is reduced to two dimensions, the electrons have quantum properties that are totally unusual and counter-intuitive. In some materials such as graphene, electrons can behave like relativistic particles without mass, a bit like photons. On the other hand, in other materials, electrons can be placed in totally flat electron bands, giving them infinite mass. These flat-band electron systems are currently attracting considerable interest from physicists. Indeed, since electrons have zero kinetic energy, very original quantum phases can be formed, for example superfluid phases.

Is it possible to induce these effects in artificial materials, whose properties would result from their manufacture and thus from electronic tape engineering? Researchers from the IEMN and the Debye Institute in Utrecht have been working on this question. The avenue explored is to start from an environment in which electrons are originally perfectly free to move in two dimensions. Thanks to the application of a periodic potential, electron waves are scattered by the potential, inducing the desired band dispersions under the effect of quantum interference. This approach requires to structure the gas of free electrons with a periodicity close to the electron wavelength, from a few nanometers to a few tens of nanometers depending on the chosen materials. It was recently validated in Utrecht, in collaboration with the IEMN, in the case of electrons located on a copper surface subjected to a periodic array of CO molecules moved by means of a tunnelling tip [1].

Inducing these same effects in a conventional semiconductor, such as those used by the microelectronics industry, would obviously open up fascinating prospects for having quantum platforms that can be integrated and are compatible with microelectronic technologies. A first step towards this goal has just been taken and published in the journal Nano Letters [2]. A honeycomb grating was fabricated in an InGaAs quantum well using an original nanostructuring technique developed at the LCPO in Bordeaux, block copolymer lithography, which allows grating parameters of the order of 21 nm. Tunneling spectroscopy measurements performed at IEMN and Utrecht show a profound modification of the electron band structure, as predicted. In particular, in spite of the disorder effects inherent in nanolithography, the spectra possess the characteristics expected by the formation of flat bands with a very high density of electronic states. This feat, which required pushing the limits of current lithography techniques, opens the way to the generation of non-trivial quantum phases in the most common semiconductor materials. 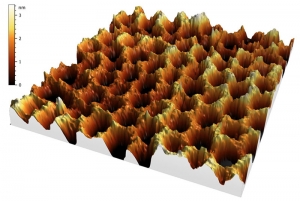 To know more about it