Context and objectives:
Terahertz frequency range lies between the electronics and the photonics. There the transistors are not fast enough and the lasers have too high energy. Still, progress in the technology opened to myriads of applications in the recent years. Specifically, THz spectroscopy enables many experiments in several fields. Among them, peculiar Quantum effects in semiconductors are extremely efficient in the THz range. This is because the structuration of the semiconductors in thin layers strongly influences the properties of their electrons. Such samples are widely used in many studies of inter sub band transitions. One of the probed effects is called ultra strong coupling. It is described as an extension of the quantum strong coupling effect when the coupling constant becomes of the order of magnitude of the frequency of the involved modes. Many experimental and theoretical works have been done since more than a decade and recently a research group demonstrated that if one confine the THz at a very small scale ( < 500 nm); the momentum of the THz-photonics mode cannot be neglected any more.
One of the corollary of this discovery is the possibility of probing not only the frequency of a transition but also its momentum.
In our group, we have developed and are using THz time domain spectroscopy for several years. We develop a set up and the corresponding data processing leading to unequaled signal to noise ratio worldwide. Such high sensitivity allows us to aim at samples that only faintly modify the signal. Thanks to our high-end clean-room we already demonstrate split ring resonators with a confining gap below 50 nm and we will use these structures to confine the mode into small bimolecular samples.

Figure: left, schematic of a Split ring resonator where the strong coupling will occur, middle representation of a typical TDS setup, right spectrum of an amino acid in the THz range.

Missions:
In this internship, we want to use this corollary to probe the vibrations of biomolecules. Biomolecules such as sugars, proteins, DNA, RNA are expected to have specific vibrational signatures in the THz range. Still they are difficult to measure due to their complexity and to simulate due to the importance of the quantum effect and their relatively large scale. We will implement THz spectroscopy of the vibrations of biomolecule using a photonic mode confined at scale below 100 nm by a single resonator.
The proposed work includes a fabrication part exploiting the micro and nano fabrication facilities at IEMN. Then, the main part will consist in performing the experiments. A data analysis will follow using Photonic simulation tools for the sake of comparison. Considering the quantity and diversity of the tasks of the project, the precise work of the student will be discussed and will depend on the taste, capacity and will of the candidate.
We are looking for physics or engineering master student or equivalent. Having one of the following skills would greatly increase the chance of success of any application: Experimental optics – Electromagnetism – Photonic simulation- Micro-nano fabrication

Environment:
The student will work with a team of experienced researchers in the THz-Photonics group at IEMN Laboratory (https://photoniquethz.univ-lille.fr/en/). The group has a long lasting experience in the conception and realization of THz optoelectronic devices, and is fully equipped to carry out this project. The Laboratory hosts a 1500m2 clean-room with state of the art growth and fabrication facilities. IEMN is located in Lille, the capital of French Flanders, a vibrant city close to the Belgian border at 50 min by train from Paris-CDG airport.
We are looking for a physics or engineering master student or equivalent. Having one of the following skills would greatly increase the chance of success of any application: Experimental optics – Spectroscopy – Python coding
The exact tasks in which the student will be involved will be discussed together with him/her and the team and will depend on its capacities and taste as the needs of the team. We strongly advise any potential candidate to contact us by email or elsewhere to begin the discussion before any formal application.

Possibility to go on with a PhD?
Yes, we are looking for two PhD student in the group next year one of them will have to deal with a really close subject.

Envisaged fellowship?
We already applied for several nationwide and European grants but the safest funding way will be to get a university of Lille grant. We are highly supported by the university and the chance of success are very high in this call for a good candidate. 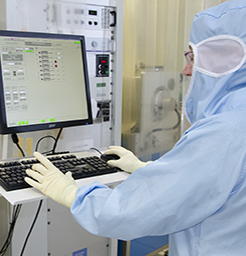