Our Atomic Layer Deposition (ALD, Beneq, TFS 200, Manufactured in Finland) equipement which we brought in July 2009 is physicaly installed in IEMN’s clean room.

ALD, as its initials suggest uses an atomic layer deposit technique. The general principle consists in successively exposing a given surface to different chemical precursors in order to obtain ultra-thin films. The deposit of an atomic layer is carried out in 4 steps :

The main advantage of this technique is obviously to be able to make very thin layers and of high purity on a considerable amount of materials. Especially, it allows to deposit a mono-layer on a surface presenting very strong aspect ratios. In fact, this caracteristic of the ALD is carriable because the chemical reactions are done on surfaces and separetely.

This equipement is constituted of:

The hot sources can the heated up to 300°C in order to increase the vapor pressures of the precursors, the reaction chamber up to 500°C.

This system is equipped with four gas lines: H2, NH3, Ar, O2 than can be used in order to make deposits. Actualy, the TFS 200 comes along with 2 interchangeable reaction chambers,  one for thermicaly enhanced deposits (conventional way) and the other one allowing deposits assessed with plasma technique PEALD (Plasma Enhanced Atomic Layer Deposition). This growing technique allows one to carry out deposits at a lower temperature with improved electrical caracteristics. For example, to deposit thermal Al2O3 we will use the TMA precursor and water; water will be replaced by oxygen plasma in the case of an ALD procedure assisted by plasma. 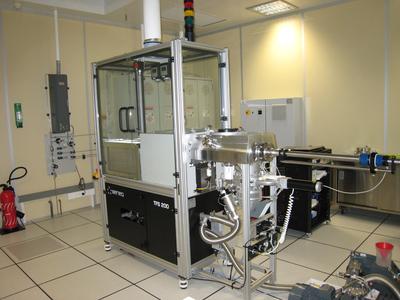